Andrzej Siwiec, Małgorzata Domagalska-Szopa, Ilona Kwiecień-Czerwieniec, Andrzej Szopa – The direction of primary lateral spinal curvature and distribution of body mass on base of support in children with scoliosis I°. Fizjoterapia Polska 2022; 22(4); 112-121

Michał Olba, Anna Mickiewicz – Assessment of the impact of the corrective-compensatory exercises and the elements of Vojta therapy on the angle of trunk rotation in children with idiopathic scoliosis – preliminary study. Fizjoterapia Polska 2022; 22(2); 102-110

Collaboration of specialists in the rehabilitation of spine pathology

Abstract
To study the influence of the negative psychological state of children and adolescents living on the territory of hostilities, on the formation and course of spinal pathology. The sample consisted of 1467 people aged 5–18-year-old, whose parents had no complaints of the child’s spinal pathology, i.e. “relatively healthy children in respect of spinal pathology.” The growth of pathology of the spine during periods of intensive growth of the child was confirmed: in the 5–7-year-old age group for 3.49% of children, in the 8-10-year-old age group for 13.78%, in the 10-14-year-old age group for 17.89%, in the 15–17-year-old age group for 25.15% respectively. An increase in the prevalence of scoliosis in the Donetsk oblast (excluding the temporarily occupied territories) at the level of 28.26 cases per 1,000 schoolchildren, which is more than in other regions of Ukraine. The similarity of the pathogenesis of scoliosis, stress, and hypercalciuria was determined, which explains the data obtained by us on the prevalence of scoliosis in the ATO area, actually 95.89 cases per 1000 children, and 251.53 cases per 1000 adolescents aged 15-18-year-old. The manifestations of autonomic disturbances (rs = 0.34, p ≤ 0.01), sleep disturbances (rs = 0.43, p ≤ 0.01), anxiety (rs = 0.43, p ≤ 0.01) is increased among children with significant fear of war. There is a need to consider scoliosis as a stressor, and therefore children with scoliosis should get psychological rehabilitation and expert advice.
Key words:
scoliosis, stress, hypercalciuria, children, adolescents, rehabilitation 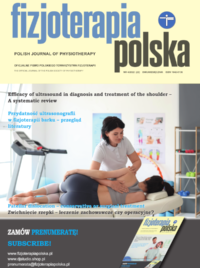