Zbigniew Śliwiński, Dariusz Milko – Normal function of the pelvis is a precondition for success in scoliosis therapy. Fizjoterapia Polska 2002; 2(4); 327-337

Principles for non-surgical procedures in the treatment of scoliosis

Abstract
This article presents the authors’ own experience in the comprehensive non-surgical treatment of scoliosis. Various types of corrective and stabilizing orthopedic braces are presented. Orthopedic equipment should be tailored to the needs of the individual patient, depending on the etiology of the curvature, the type and dimensions of the distortion, and the age of the young patient. Indications and counterindications for treatment by orthopedic braces are given. Significant reduction in the deformation of posture can be obtained by using a correctional brace even in cases when proper application does no more than to slow the progression of curvature. The authors also discuss abnormalities in the orthotic treatment of spinal deformities encountered in daily practice with ambulatory patients. Kinesitherapy is indicated as an essential supplement to the brace, and not as a substitute for it.

Abstract
Both the values of the spirometric parameters in people with low-degree scoliosis and their changes in course of the rehabilitation treatment aiming to correct the body posture are subjects rarely mentioned in literature. Just sparse articles give evidence for the presence of respiratory disturbances even in early stages of the development of scoliosis. The hypothesis claiming that normalisation of the values of selected spirometric parameters, decreased earlier, during attempts of correction of the body posture could be obtained was brought forward for needs of the presented report. 60 children with scolioses of Ist and IInd degree and without any coexisting health problems participated. The evaluation of the values of selected spirometric parameters was performed twice: at the beginning of the treatment (initial test) and after its termination (final test). The time of therapeutic influence averaged 28,77 days (SD = 9,47) and daily load with corrective exercises about 3 hours with supplementary procedures. During the period of time between initial and final tests most of the assessed spirometric parameters showed significant improvement increasing their values and bringing them closer to standards (FVC EX, FVC IN, FEV1, PEF, PIF, VC, IC). The ERV parameter didn’t show any important alterations. The volumes TV and MV as well as Tiffeneau coefficient maintained their previous rise tendencies.According to the stated hypothesis the corrective rehabilitation treatment improved values of selected spirometric parameters, which were decreased in course of low-degree scoliosis. Basing on the results some practical clues concerning corrective treatment of this postural fault may also be formulated. 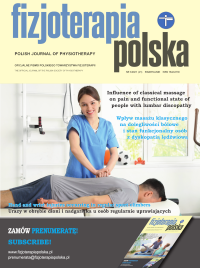