Abstract
The aim of this paper was to evaluate the effect of physiotherapy on upper limb function in post-mastectomy women. Thirty-three women attending the Amazons Post-Mastectomy Women’s Club at the Holy Cross Cancer Centre in Kielce were examined on two occasions at three months’ interval. The participants were divided into Group I of 15 patients regularly attending rehabilitation and Group II of 18 patients practicing rehabilitation occasionally. Bilateral measurement of the angular range of motion in the shoulder was the basic method of assessment. A shoulder range of motion of the upper limb on the operated side smaller by more than 10° in relation to the opposite limb was regarded as ROM limitation. Upper limb circumferences were also measured at 10 cm above and below the lateral humeral epicondyle and in the central metacarpus excluding the thumb to an accuracy of 1 mm. Circumferences of the upper limb on the operated side greater by more than 2 cm compared to the opposite limb were regarded as lymphoedema. Our evaluation of statistical significance of correlations between qualitative parameters (influence of rehabilitation on limitation of the shoulder range of motion and incidence of lymphoedema) relied on the non-parametric Chi-square test (χ²).There was a statistically significant correlation between regular rehabilitation practice and the shoulder range of motion and persistence of upper limb lymphoedema on the mastectomy side.Physiotherapy improves ROM and effectively prevents deterioration of upper limb lymphoedema in post-mastectomy women.
Key words:
breast cancer, mastectomy, shoulder joint, range of motion, lymphoedema
tagged with breast cancer, Ewa Puszczałowska-Lizis, mastectomy, mastektomia, obrzęk limfatyczny, Paweł Lizis, rak piersi, shoulder joint, staw barkowy, zakres ruchu 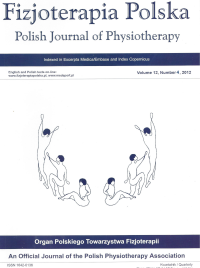