Abstract
Background. Stroke is the third most common cause of death, one of the most common causes of handicap, and the most common cause of disability among persons older than 40. Each year 4.6 million people around the world die from strokes, including 3.2 million in developing countries and 1.2 million in highly industrialized countries. In view of the high morbidity rate and the serious consequences of stroke, in the form of limb paresis, the authors decided to use a thermovision camera to check vascular reactions in the paretic limb by evaluating temperature changes on the skin subsequent to cryostimulation by liquid nitrogen vapors. Material and methods. Our research involved 28 patients with an average age of 61.3 years. The procedure was performed on the forearm of the paretic upper limb, which was cooled for 6 minutes (from the hand to the elbow cavity, the dorsal surface and the palm surface). Thermovision images were made 5 times for each patient. Results. The authors observed that as a result of the procedure the temperature of the cooled limb went down 12°C, and 2.6°C in the other limb. Conclusions. The results cannot be easily interpreted. In the authors’ opinion, the temperature reduction in the limb that was not cooled results from contralateralization of the consensual reflex. The present study is a preliminary report describing the phenomenon we observed.

Constraint-induced movement therapy in the rehabilitation of stroke patients

Background. This article presents some preliminary results from the rehabilitation of patients with impaired hand function after stroke. The basis for therapy was the method introduced by Taub, known as Constraint-Induced Movement Therapy (CIMT), which involves the temporary constraint of the healthy upper limb, with simultaneous intensive motor rehabilitation of the dysfunctional limb. Material and methods. Our research involved 10 patients treated in the Rehabilitation Clinic at the Jagiellonian University College of Medicine for post-stroke hemiparesis. There were 5 men and 5 women in this group, ranging in age from 57 to 77 years (ave. 66.5). The time since onset ranged from 1 to 50 months (ave. 11.4 months). CIMT was used in all patients. Results. After 2 weeks of rehabilitation all the patients required less time to perform manual tests, and showed marked functional improvement in the affected hand. Conclusions. The CIMT method is effective in the rehabilitation of patients with post-stroke hemiparesis.

Background. The authors attempted to evaluate the effect of selected demographic and clinical factors on the efficacy of Constraint-Induced Movement Therapy (CIMT) in improving the mobility of a paretic hand following cerebral stroke. The analysis focussed on factors such as age, gender, side of paresis and time elapsed since stroke. It is commonly known that post-stroke rehabilitation is relatively difficult and poses a challenge not only to the therapeutic team, but also to the patient’s family. Despite activities geared towards improved mobility, satisfactory effects cannot always be achieved. Until recently, physiotherapy was mainly geared towards the compensation of deficits rather than functional restoration. Nowadays, specialised neurological rehabilitation centres introduce novel methods based on the concept of brain adaptability, aimed primarily at functional restoration. The CIMT method is being used more and more frequently. It can be succinctly defined as a strategy for the activation of paretic parts of the body through constraining or totally preventing the use of their healthy counterparts. Material and methods. The study group comprised 21 persons (11 women and 10 men) following cerebral stroke. Mean patient age was 65 years. The efficacy end-point for the rehabilitation approach was time required to carry out 10 basic everyday activities using the affected hand. This assessment was carried out four times: at baseline, after two weeks of intensive exercise in a hospital rehabilitation ward as well as at 4 and 12 weeks of independent practice at home. Results. The therapeutic programme lead to a highly significant (p<0.001) improvement of the performance of the motor function impaired hand. Subgroup analysis did not demonstrate any significant influence of individual factors on the efficacy of the method used to improve hand motor function after cerebral stroke. Conclusions. Regardless of the age and gender of cerebral stroke patients, the CIMT method demonstrated significant efficacy in improving hand motor function. Time elapsed since stroke has no impact on the improvement of the paretic hand using the C1MT method. Regardless of the affected side, the method activates the motor functions of the paretic hand.

Abstract
Brain stroke is the leading cause of disability, and usually affects people after 60. At this age, the risk of concomitant diseases, affecting not only the cardiovascular system is high. The number and intensity of the diseases are often contraindications for early post stroke rehabilitation. Patients after brain stroke and heart transplantation are rare cases. The aim of the study was to present the effectiveness of early post-stroke rehabilitation in case of the 53-year-old man who underwent heart transplantation in 2000, due to congestive cardiomyopathy. The patient was examined 4 times during the 3rd, 6th, 9th and 15th week after the stroke. The test examined muscle strength in Lovett scale and the grade of muscle tone in Ashworth scale. A functional test was performed in Barthel scale and the extent of requiring care and attention — in Rankin scale. The paper presents an individual diagram of physiotherapeutic procedures divided into two stages: the early stage (0-6 weeks) and the transient stage (6-9 weeks), adjusted to the patient’s actual neurological and cardiological state. Basic recovery after physiotherapeutic treatment was obtained before the 9th week. Patients after heart transplantation can be successfully treated by rehabilitation. A substantial progress in medicine obligates to exchange information about rehabilitation treatment of patients with untypical concomitant diseases.
Key words:
brain stroke, heart transplantation, post stroke rehabilitation

Abstract
Background. Cerebral stroke is defined by the WHO as sudden onset of rapidly developing clinical signs of focal disturbance of cerebral function, with symptoms lasting longer then 24h, or leading to death, caused by changes in the arterial or vascular system of the brain. The aim of this study was to assess the effect to early rehabilitation on the locomotor function in stroke patients. Material and method. A group of 30 patients with hemiparesis within 24h after the onset of stroke and after 14 days of rehabilitation. The locomotor assessment was carried out according to the PNF functional status of muscles and gait patterns. Activities of daily living were evaluated according to the Repty Functional Index (RFI) and the Simple Chart of Locomotor Activities (PKCM). The level of disability was graded to the Rankin scale. For logistic reasons, the study did not include a control group, so that the paper is treated as a preliminary report.Results. Locomotor improvement was achieved in 40% of patients, with reduction in disability in 50%. Improved locomotor function led to urinary function improvement in 50% of patients. Motor dysfunction of the upper limb was reduced thanks to physiotherapy in 40% of patients. Conclusions. Early rehabilitation leads to improved function as defined by the functional status of muscles and hait patterns. The adopted rehabilitation programme resulted in improved functional indepedence evaluated on the basis of the Repty Functional Index (WFR) and Simple Chart of Activities (PKCM). The locomotor improvement resulted in urinary improvement in 50% of patients. Early rehabilitation improved the locomotor function of the paretic upper limb. The conclusions need to be verified in further studies with control groups.
Key words:
cerebral stroke, hemiparesis, early rehabilitation, functional status

Abstract
Background. Physiotherapy employs a number of kinesiotherapeutic methods based on understanding the course of the development- and movement-related neurophysiological processes, with PNF being one of the methods. Rehabilitation of stroke patients produces better results if different methods are combined, e. g. PNF and KT. Material and methods. The study involved 15 post-stroke patients, including 10 men and 5 women, aged 39-72. Each subject was examined once. Two muscle tone tests according to the Ashworth scale and three functional tests of the paralyzed upper extremity (prior to the therapy, on completion of PNF therapy and following functional KT application) were performed. The upper extremity function test consisted in the subject picking up an object. The distance [cm] between the object and the table surface was measured. Each patient underwent a 45-60 minute rehabilitation session using the PNF method. Additionally, KT was applied onto the radiocarpal joint extensor muscles.Results. Muscle tone according to the Ashworth scale did not change. The mean functional test results [cm] were as follows: 3.8 prior to the therapy, 6.6 post-PNF, and 7.8 post-KT. In two subjects the functional test results did not change, whereas the upper extremity function in the remaining 13 subjects improved after PNF therapy. A marked improvement was observed following the application of KT. In 10 patients, the additional KT application considerably facilitated PNF-based rehabilitation. Conclusions. A combined PNF and KT therapy contributes to improvement of function in the paralyzed extremity. Functional KT application proved to be useful and to facilitate PNF rehabilitation, and so the two modalities may and even should be combined. Although the patients were only subjected to a single PNF session, the function of the upper extremity improved. An even more marked improvement was observed following the functional application of KT. Muscle tone according to the Ashworth scale did not change significantly on completion of the therapy. However, it did not have a decisive influence on the positive results of the functional tests. We did not observe a correlation between the combined PNF and KT therapy and the duration of the post-stroke period was.
Key words:
Kinesiology Taping applications, PNF method, cerebral stroke

Abstract
Background. The risk of fali within the first year after a cerebral stroke amounts to approximately 40%. Numerous attempts have been made to propose a simple, yet sensitive and specific test to facilitate effective identification of patients at a particularly high risk of fall. The present study therefore aimed to assess the risk of fall among post-stroke patients undergoing physical rehabilitation with the Berg Test (Berg Functional Balance Scale). Material and methods. A total of 312 patients treated initially at the Stroke Ward and later at the Department of Physical Rehabilitation and attending the Vascular Disease Outpatient Clinic of the Hospital in Końskie in 2004 were followed up over 12 months. Each patient was assessed during the initial rehabilitation period and then allocated to one of four risk groups depending on his/her score in the Berg Test. Every subsequent fali was recorded together with a brief description of any consequences. Results. 119 patients (35%) fell at least once during the 12-month period, with 36 (11.5%) sustaining serious injuries as a result. The majority of the falls (78 patients) occurred in Berg Group IV (highest risk) patients, who also sustained multiple falls and the most serious consequences. The respective number of incidents in the other groups was 24 falls in Group III, 15 falls in Group II, and only 2 falls in Group I. Conclusions. The Berg Test appears to be a simple, reliable and sensitive instrument for identifying patients most at risk of sustaining an accidental fali. Ensuring particular care for those patients may help them avoid serious consequences of falls and enhance overall rehabilitation outcomes.
Key words:
stroke, falls, risk factors, Berg Balance Scale 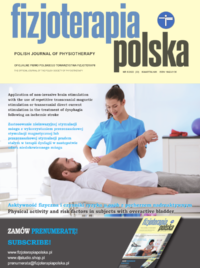 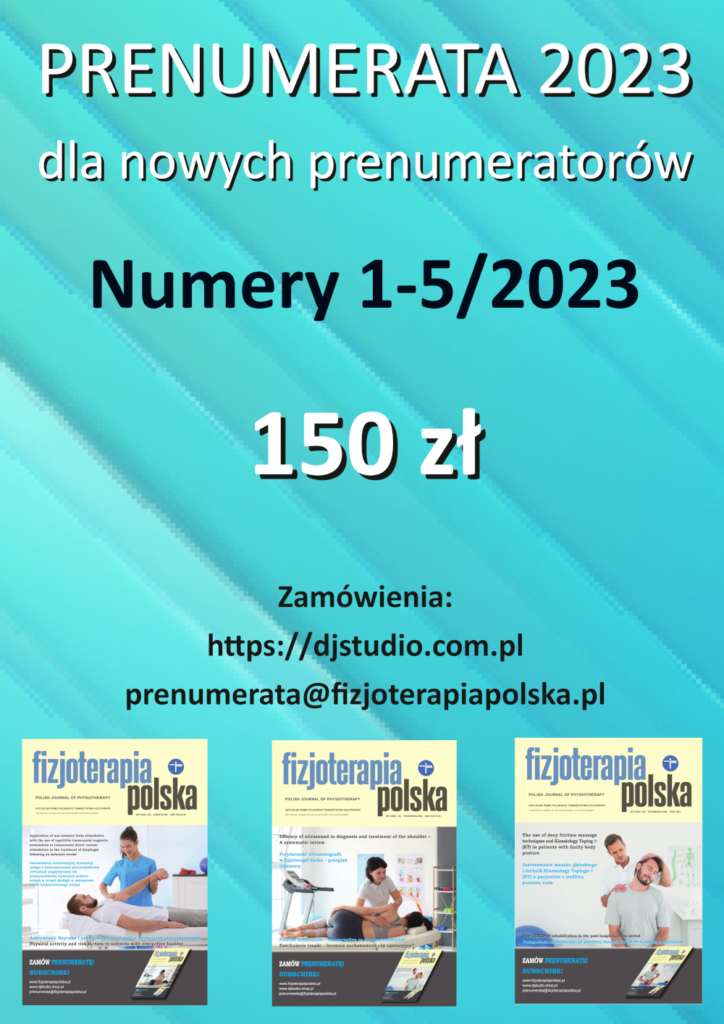